The symptoms of measles generally appear about seven to 14 days after a person is infected.
Measles typically begins with: high fever, cough, runny nose, and red, watery eyes (conjunctivitis).

Two or three days after symptoms begin, tiny white spots  may appear inside the mouth.

Three to five days after symptoms begin, a rash breaks out. It usually begins as flat red spots that appear on the face at the hairline and spread downward to the neck, trunk, arms, legs, and feet. Small raised bumps may also appear on top of the flat red spots. The spots may become joined together as they spread from the head to the rest of the body. When the rash appears, a person’s fever may spike to more than 104° Fahrenheit.

After a few days, the fever subsides and the rash fades.

Measles can be prevented with the MMR (measles, mumps, and rubella) vaccine. In the United States, widespread use of measles vaccine has led to a greater than 99% reduction in measles cases compared with the pre-vaccine era. From 2000 to 2013, a range of 37 to 220 measles cases per year were reported in the United States, and most of these originated outside the country.

Measles is still common in other countries. The virus is highly contagious and can spread rapidly in areas where people are not vaccinated. Worldwide, an estimated 20 million people get measles and 122,000 people die from the disease each year—that equals about 330 deaths every day or about 14 deaths every hour. 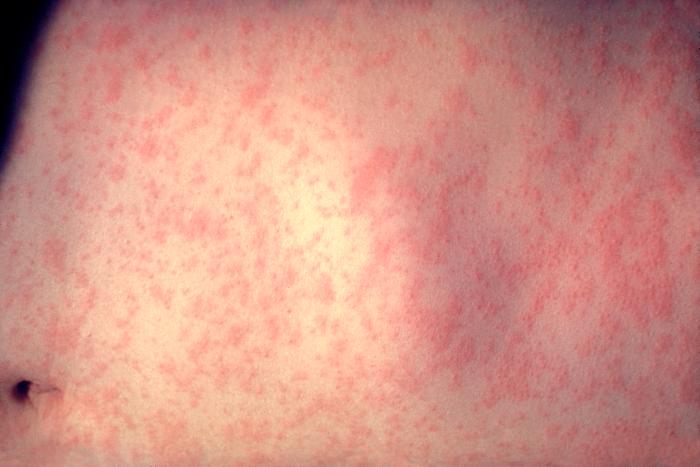 Vaccine Recommendations in Children and Adults

Students at post-high school educational institutions who do not have evidence of immunity against measles need two doses of MMR vaccine, separated by at least 28 days.

Adults
Adults who do not have evidence of immunity against measles should get at least one dose of MMR vaccine.