Cursing Can Ease Your Pain and Raise Your Confidence 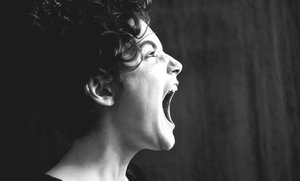 Yes, you have full permission to drop the F-bomb loud and proud next time you slip on ice or have a date from hell. Can I get an eff yeah? U.K. researchers from Keele University found that using your pottymouth can actually alleviate physical and emotional pain. In one experiment, they had subjects dunk their hands […]

What’s the likeliest thing you would do when you unexpectedly walk on a broken glass or cut yourself with a blade? The answer is simple; exclaim!!! But most often our exclamation is full of curses. This is generally an involuntary action, but researchers say it actually could be helpful in relieving us from the pain that caused us to exclaim. The researchers from the United Kingdom believe uttering swear words somehow make us feel better. They call it a “harmless emotional release”. The experts warn though that we should not go crazy using fowl language as it works in relieving pain only when used sparingly.

Something else which the researchers discovered, the more creative you get in exclaiming, the better you feel. In a study to back this claim, volunteers played video games; either something aggressive or a calmer golf game. The results showed that the more vulgar participants went, the better their performance in the game.

The study’s author, Amy Zile says “Our study found that when we raised people’s emotional arousal level they became more proficient at swearing such that they were able to produce a greater number of different swear words and expressions in a one-minute period.” She continues, “This provides experimental support for the theory that swearing is emotional language.”

If you face a difficult situation therefore and get to use some fowl language, just don’t bother about being morally upright. Even science has your back on that one. You only need to watch out where and how you use this technique to relief your stress. You do not want to scream f*** and sh** in church. That’ll not be good for you. Remember also that you do not have to use the technique quite often. Otherwise, you wouldn't quite get the expected result.